Clive and Shirley Children’s Entertainers with 15 years of experience

* Entertainers you can trust nobody feeling left out,

Your Birthday Child will be the Star of the Party.

How To Get In Touch… 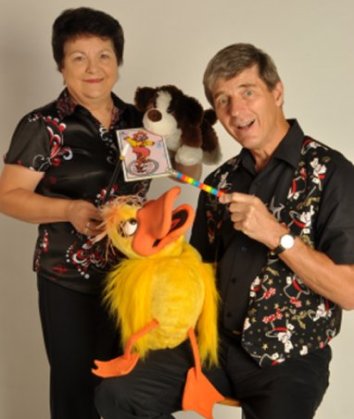 A Few of our Many Client Feedback

What can I say except a HUGE THANK YOU! to both of you for such a fabulous 10th birthday Disco Party for my daughter Eleanor! She along with all her friends enjoyed it so much, they were very sad when it was over, and said they could have gone on at least another hour!
The X Factor, Limbo and Pom Pom games were a refreshing change and just perfect for their age group. The feedback from her friends at school and the Mums, has been overwhelmingly positive, so look out for referrals!!
We wish you both continued success with Party Kidz and thanks again!
With warm wishes Sallianne

Thanks so very much to you and Shirley for giving Tamsin and absolutely amazing party last Sunday. We have had so many compliments from parents and comments about how wonderful you were – We were really impressed by how you enchanted and engaged the children for the whole time, and it was really great how you got the adults up and having fun too, if they wanted to, therefore making a children’s party a really enjoyable and fun occasion for everyone involved. I really felt like Tamsin had a party that we will always remember.
Thanks again and all the best Emma, Gareth and Tamsin

Some of the areas that we cover:

A Few of our Many Client Feedback

I’ve been wanting to do this since the party; which is to give you both the biggest thanks possible . All the girls and boys at both parties had such a wonderful time, it was a huge success. The help and support you both gave me were well above and beyond the call of duty and I can’t express strongly enough my gratitude. I have prepared a couple of lines that you can use for your website

Clive and Shirley held 2 back to back parties for my 2 daughters aged 3 and 10 and I cannot sing their praises highly enough. If you are looking for children’s entertainers please do not look any further as they do not come better than Children’s Partykidz. They tailor made each party specifically to each of my daughters own interests and personality- which incidentally couldn’t be farther apart! All the boys and girls who attended my 10yr Old’s party have expressed an interest in having a party just like my daughter’s and from 10-11 year olds that must be high praise indeed! The mums of the toddlers who attended my 3yr Old’s party were similarly interested. Clive and Shirley have my permission to pass on my number to anyone interested in booking a party through Children’s Partykidz as I am happy to talk to anyone about the wonderful service and excellent value for money they provided. I would not hesitate in using their services again in fact I can’t wait for next year!

Just wanted to thank you very much for Kimberley’s 10th party.

I was not sure if they would be too old to make teddy bears, but that was not the case at all – the teddy bears were of excellent quality, and its a nice idea to have a star which they make a wish on and have a birth certificate to keep. Also I was amazed how well you kept the children’s attention at the start, with the dancing and activities to HSM! Feel free to add this feedback to your website, not that you need it!

Just to say thank you very much for giving the kids such a fantastic time. They all loved the party and you kept the 6 and 7 year olds as well as the 13 year olds entertained and involved.

We all thought you were both great and would not hesitate to recommend you to others.

The kids were saying that “it was the best party ever!”

Thank you very much

Thank you. We couldn’t have made the day any better, you were both fantastic and showed such care and professionalism, and very calm too. The party was very much enjoyed and positive comments from the children ‘they are great’ being the one mostly heard. From our point of view you made our sons 5th birthday party one we will never forget, I have since discovered that you entertain age groups up to twelve, so who knows we may see you again in the future. You were the party. Thank you. Regards, Karen and Marc

We would like to thank you both very much for the fantastic H.S. Musical 4th & 6th birthday party you did for our daughters. All the children had a great time and you made our daughters feel very special.

The party ran so smoothly as you did an amazing job of keeping the children engaged and entertained at all times, especially as there was a varied age range of children.

When we were driving home from the party my older daughter asked if you would be able to do her next party …………. so I think we will be calling on your services again!

We would not hesitate in recommending you to anyone as I know they will be more than satisfied and have very happy children.

With kind regards & many thanks

Clive & Shirley we can’t thank you enough, the kids all enjoyed themselves, and you were able to keep 23 boys under control, as well as the girls, the feedback from school has been great and I have past your details to several parents, I look forward to using you both again for my other son when he is a bit older. Many thanks again Julia

Thank you very much for all your help with Rosie’s 6th birthday party last Saturday. You did a great job of entertaining them ALL and Rosie and her friends really enjoyed it. It took the pressure off us, so we could enjoy the party too.

Many thanks as well for taking enough time to wield your way through the Bath traffic!

I hope your next party went well too.

Thanks again  Georgie and Stephen

How To Get In Touch…